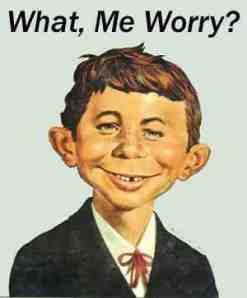 Thought it was going to be a slow day, but it finally appeared. The first totally ridiculous statement of the morning.

I heard one today I had never heard before, “enhance the male experience” now that has to be a first. I have heard it called a lot of things during the course of my years, but I have to admit.

I have never heard it called that.

“Honey, come on in here, so we can enhance the male experience! Aw C’mon sugar, you have to be here for some of it. Please?”

Best I move on.

Can we build one for you?

The automakers are really starting to cry the blues. Many of them won’t survive what is left of this year. Almost 600 of the 2,000 dealers nationwide are out of business now, and they are losing about two dealers per day to lagging sales. General Motors credit arm GMAC now requires a credit score of 700 or better to finance a new car.  This is what happens to you when you consistently build vannila wafer, cookie cutter, fuel gulping cars … you slowly die.

Gun advocates in Oklahoma want laws to allow carrying guns in plain sight. In Oklahoma residents can get permits to carry concealed weapons but cannot display guns openly. A signature drive is trying to change that. I suppose this means we will not be allowed to bring them to church?

A man ran for the office of sheriff in a small Oklahoma town. The day after the election he was spotted walking down the street, with a firearm strapped to his right hip. His neighbor said to him, “Carl, how come you are a packing that pistol, you lost that election for sheriff yesterday.” And he just smiled and replied, “A man with as many friends as I have in this town, ought to be wearing a gun.”

Listen up! Do we have a deal for you!

Campaign seeks next “Joe The Plumber.” Are you the Joe the plumber type? A regular American who doesn’t want Barack Obama to be president? If so, Republican nominee John McCain’s campaign wants to hear your story, in the form of a 30 second video that might be used as one of their television ads.

Now I can hear you giggling and snickering in the background and you are not buying a word of it. But it is true (Have you ever known me to lie to you? Don’t answer that question.) McCains team announced an “I’m Joe The Plumber” contest. Go to johnmccain.com for details.

You could be the next average Joe to be chewed up and spit out by the Political Machine! Is this truly the land of opportunity or what?

We are all about labeling in this country, they are looking for “Average American’s” by their own admission but refer to them as Plumber Joe’s. Why is it we do this crap. Why is it that no one ever questions the use of thoroughly unnecessary terms such as “African American, Asian American, Hispanic American, to name a few.”

We are all Americans and we are not all plumbers.

Take me for instance, how come no one is looking for “Average-Angry-White-Taxpaying-Guy” because that is what I am … don’t know a thing about plumbing and that is a fact. A nation of people who cannot agree to speak the same language, make up modifiers to describe their brothers and sisters.

It’s easy take a shot at it: Arachnoleptic fit (n.): The frantic dance performed just after you’ve accidentally walked through a spider web. Beelzebug (n.): Satan in the form of a mosquito, that gets into your bedroom at three in the morning and cannot be cast out. Caterpallor (n.): The color you turn after finding half a worm in the fruit you’re eating. Foreploy: Any misrepresentation about yourself for the purpose of getting laid.  See, nothin to it.

How Do They Keep Their Shirts On With That Big Heart

Akron Ohio … “Who says big biz and the government don’t have a heart? Mortgage giant Fannie Mac this week said it would forgive the debt of a 90-year old woman who shot herself in the chest to avoid being evicted. She shot herself after deputies came to evict her from the home in which she had lived for some 40 years.

Los Angeles California City police officers are more likely to stop and search black and Hispanic residents than they are whites, even though whites are more often found carrying guns and contraband, according to a report released by the American Civil Liberties Union of Southern California.

This is the same state that in 1989 had two school districts ban the book Little Red Riding Hood by the Brothers Grim. Was it because the Big Bad Wolf’s consumption of people seemed too violent? Nope. School officials thought the story might encourage children to drink because it depicts a bottle of wine in the basket Red takes to her grandmother.

You buy your tickets … Take Your Chances

Richmond Virginia. A technical problem with a new Virginia Lottery game may have led hundreds of players to believe they won bigger prizes than they did. Lottery officials caught the mistake in its Fast Play Super 7’s game after more than 2,300 tickets were sold. Officials blamed a software problem for the misprinted tickets and asked the Attorney General’s Office whether they must pay the expected prizes.

Sweetwater County is considering an ordinance that would spell out where sex shops could operate. The proposal also would prohibit sexually oriented businesses from advertising on signs placed on vehicles. Outrage over a sex shop sign posted on an abandoned school bus prompted the proposed changes. A sex shop is where you go to buy products that artificially enhance the male experience or fulfill your rubber fetish, whichever comes first.

Now if Y’all will excuse me, I need to go clean my gun (the one that does not require any kind of enhancement that is).

Parting shot: “It is useless to hold a person to anything he says while he’s in love, drunk, or running for public office.”

(Parody of She’s a Lady by Tom Jones)