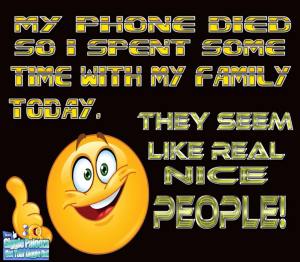 Most everyone that knows me, will testify to my obsession my outright hatred of Cellphones.  I make no bones about it.  When used as a phone that is okay, but most people use them for everything but a phone and that irks me.

Yesterday I had breakfast at Denny’s (low on grease this month) and I watched a guy have breakfast with his little guy buddy.  His boy had to be about five or six, and they sat there in the booth and talked, and ate breakfast.

Yeah I know, what is the big deal, it is just breakfast.

The big deal is during this entire time, the guy paid complete attention to the child, he talked with him, he helped him with his food, showed him how to do things.  “Your hands are greasy, take a napkin like this, good, now wipe your hands.”

Not one time did he pick up or look at a stinking phone.
Not once.

I finished up first, so I walked over to their booth.  Asked this little guy, “Is this your Dad?” and he smiled real big and said, “Yes, he’s my Daddy!”

Then I looked at Dad and said, “I would like to shake your hand if that is alright?” and he looked at me a little confused and said, “Sure.”

At that time I said, “It has been a long time since I saw a man or a parent for that matter, enjoying the company of their child.  Usually they have their nose buried in a phone or something.  I want to commend you on spending time with the child and not the phone today.  Okay?”

And he said “Thanks.” 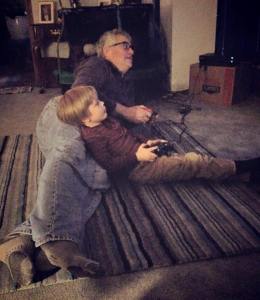 Walked over to the counter, paid for my meal, and then asked the lady “How much is this guy’s tab over there.”  She looked it up, gave me the amount and I paid for his breakfast.

As I was leaving, I glanced over and waved at the little guy and he waved back and I left.  On the way to the car I thought about it.   “We never really grow up, we only learn how to act in public.“

Every now and then, it takes a Daddy to show us how.