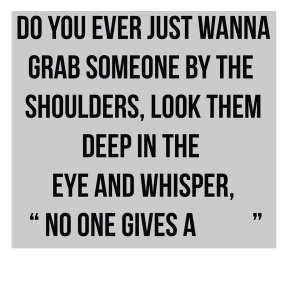 Every day I will come onto Social Media and find some 40-60 posts on what is wrong with this country.  Most of them concern politic’s, politicians, so-called low-life’s, scumbags, illegals, people from Persia or the Middle East, religious nut cases.

But this morning, I am throwing in a little wake up call of my own.

The measure of a society is felt or held in check by its citizens.  Whether or not they obey or adhere to the rules, regulations and customs established, is up to them.  Yesterday in the shank of the afternoon, I parked at the local WalMart and watched the parade of humanity go in and out of the complex.

Sitting in the heat of the day waiting on the wife to get her cake mix and what have you.  I watched the slovenly, ignorant, non-compliant bitchers’ and moaners that cannot seem to get out of their pajamas at three in the afternoon, enter and leave this store.

Also learned a few things, which I will now share.

In the span of forty minutes or thereabouts, I saw two good ol boys, over-alls, hankies, hanging out of the pocket, baseball caps, stand beside a pickup and openly consume Budweiser and discuss the problems of the day I suppose.  Used to be a time in this country, you did not consume booze during the day, and especially not out in the open, in public, and almost certainly feared going to jail for doing so.

Three families, during this time, drove up and parked in the handicap spots, no visible injuries or difficulties observed, no stickers or notices applied to the auto’s.  One was very obese, but I fail to see where that qualifies him as “handicapped.”

All three, came and went, availing themselves of the close in parking.

Having almost died three times in the past two years, I still park out and walk in.  Figuring these spots are for those who need them, individuals who earned them, for returning Vets. not decked out to the nines ladies, in a washed and highly polished GM Escalades.

Mid-Week I observed a cavalcade of over 60 police officers escorting the President to a prison to measure the square footage of a cell, but no one around here to write up illegal parkers or drunks in the parking lot.  What is wrong with this picture boys & girls.

Just before leaving, in the space next to me, a guy and his daughter pulled in driving an ATV camouflaged thing.  No headlight, no tail-lights, no Oklahoma Lic. Tag, and for the sake of the argument as presented here, I would assume no insurance.

And then it struck me, almost as if being hit with Thor’s Hammer.
“I must be stupid or something.  I most generally try my level best to live by the rules.”

After paying for my brew, you can find me sacking it up, and taking it home.  There I drink my beer under the shade of a stately Sycamore Tree in my backyard, often sharing it with a neighbor, not in some WalMart Parking lot filled with tossed used baby diapers and the trash of man.

So here I am, sitting in my old truck at a WalMart on the fringe of Western Oklahoma.

A pickup which I might add that is 15 years old, because I cannot afford a new one.  But some pecker-head working for a roofing contractor, is driving a brand new Ford.  I shell out thousands of dollars for car insurance every year, in order to drive on roads I share with Illegals who do not bother to insure their cars (only one in five in Oklahoma has insurance).

A new pickup apparently is easy to afford, when you aint shelling out cash for insurance every month.

The part that really cracks me up is how everyone wonders why their kids are so F*** up?  How they jump on Social Media almost daily and post all of this garbage about what is wrong with OUR country, when in fact, they cannot see the forest for the trees.  It is so easy to sit back and blame the politicians, the foreigners, everything under the sun, for our ills and problems facing us in the American Way of Life these days.  But if you step back from all of this and take a good hard look at it.  You will see it is not entirely that group of people who are screwing things up.

Perhaps one day soon, the majority of you will snap out of it, open your eyes and realize “it aint all of them that are causing all of the problems.”  You will see as I did today, that you have met the true enemy of this country and low and behold, it was us.

Disclaimer:  Events portrayed in this post may or may not have occurred in the manner presented and are for entertainment purposes only and should not be construed as the truth in any way, shape, form or manner.  Any resemblance to anyone owning, driving, or selling a bus or full timing or traveling in a Schoolie is purely co-incidental and should not be taken as factual information or data.

3 thoughts on “Gawd Help Me … I Am Feeling Normal Again.”