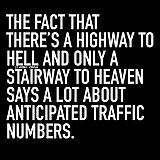 It is not easy, sitting here, 24/7 writing all this, five days per week.  No wait a minute, is that right?  531 words just for you, now tell me, “don’tcha feel kinda special.  The PUMP-HOUSE GANG IS NOW LONG GONE, AS AS USUAL, IT WAS ALL ABOUT GRANDMA.

END_OF_DOCUMENT_TOKEN_TO_BE_REPLACED

Really Bad Joke:  I noted that Obama used Martin Luther Kings’ Bible on the swearing in ceremony the other day.  This guy has trashed more bible parables and guidelines than any other guy in recent history.  Nothing is sacred, now Kings’ bible has been thrown into the mix, instead of a treasured piece of history, it is now relegated to nothing more than another prop in this circus show.

Just In Time:  Today I received my Fiscal Cliff Survival Pack from the White House.  It contained a parachute, a ‘Obama Hope & Change’ bumper sticker, a ‘Bush’s Fault’ poster, a ‘Blame Boehner’ poster, a “Tax the Rich’ poster, an application for unemployment, an application for food stamps, a prayer rug, a letter of assignation of debt to my grandchildren and a machine to blow smoke up my a**.  All directions were in Spanish.

Keep an eye out.  Yours should arrive soon..

Not Much Better In Canada:  The Alberta Department of Labor, Division of Labor Standards claimed a small rancher was not paying proper wages to his help and sent an agent out to investigate.

AGENT: I need a list of your employees and how much you pay them.

RANCHER: Well, there’s my hired hand who’s been with me for 3 years. I pay him $200 a week plus free room and board.

Then there’s the mentally challenged guy.

He works about 18 hours every day and does about 90% of all the work around here.

He makes about $10 per week, pays his own room and board, and I buy him a bottle of bourbon every Saturday night so he can cope with life.  He also sleeps with my wife occasionally.

AGENT: That’s the guy I want to talk to – the mentally challenged one.

RANCHER: That would be me.

It is all in the way you think:  Whew! What a relief to learn this  …  Ever walk into a room with some purpose in mind, only to completely forget what that purpose was?  Turns out, doors themselves are to blame for these strange memory lapses. Psychologists at the University of Notre Dame have discovered that passing through a doorway triggers what’s known as an event boundary in the mind, separating one set of thoughts and memories from the next. Your brain files away the thoughts you had in the previous room and prepares a blank slate for the new locale.  It’s not aging, it’s the **** door!

Thank goodness for studies like this.  I had erroneously believed that my trigger was in my rear.  No seriously, I would walk all the way up to the barn, stand there like some kind of lost goose, and never figure out what it was that I walked up there for.  Then I would walk all the way back to the house, and sit down … And pow!  It came to me!  So naturally I figured my trigger was in my rear, turns out it wasn’t there at all.

The Last Word: In a recently held linguistic competition held in London attended by the best in the world, Samsundar Balgobin, a Guyanese man from Bachelors Adventure, was the clear winner with a standing ovation lasting over 5 minutes. His final question was this … How to explain the difference between COMPLETE and FINISHED in a way that is easy to understand. Some say there is no difference between “these two words”.

Here is his answer which made him receive an invitation to dine with the Queen who decided to call him after the contest. He won a trip to travel the world in style and a case of 25 year old Eldorado rum for his answer.

Hang in there … weekend is just around the corner.

No new Lexicon to add to the mix today, this piece is about just three little words.  I Love You.  I Am Sorry.  I Hate That.  Leave Me Alone.  I Am Done.  Here It Comes.  I Am Sad.  I Am Happy.  Just depends on how you use them.

About a month ago I lost what I considered (up and until that time) a good friend over three little words.  We were having a spirited off line debate on a issue, and after the third time trying to explain my position, I just gave up and said … I Am Done.  And that was it, from that point on, the friendship eroded and fell off the radar.  From that point on contact was cut off and there were no more exchanges.

Maybe I need to buy a copy of ToneCheck?

There is a feature available for certain email software programs called ToneCheck. This works much like spell-check, except rather than correcting your misspelling of “recommend” and overlooking the fact that you wrote “you’re” when you meant to write “your.” ToneCheck highlights content which exceeds some kind of preset filter for negative (or exceedingly positive) emotions such as anger, sadness, resentment, elation, etc.

ToneCheck was released as a plug-in with Microsoft Outlook, and will “allow for personal variations in tone, gauge a sentence’s level of emotional ambiguity and offer suggestions for revision.” A few have suggested that “the tone of my posts” should be a little less intense and so forth, so in my case, it might be a good idea.

Like most Americans “I have the right to remain silent” but seldom exercise that right.  Which of course often brings me grief from the word police or some administrators/moderators.  It might be a good idea for me to purchase this thing and try it out … Who knows, might cut some of you some slack in the process.

It could be a good deal and then it might be a total waste of money.  I can’t decide if this is really terrific, or laughingly absurd. We’ve all sent an email we’ve almost immediately wished we could un-send (the only thing I miss about AOL), we’ve all cringed at our own words when they come back to us at the bottom of a reply, many of us have probably adopted the if-I-write-it-when-I’m-upset-angry-bitterly-disappointed-resentful-stark-raving-mad-I’ll-wait-for-24-hours-before-sending-it policy.

I guess the assistance of an objective “third party” giving us a virtual nudge and asking “are you sure you want to say it that way?” wouldn’t be a bad thing. I could always choose to ignore it. Maybe someone should develop a real-life version, something along the size of a digital recorder, which we can speak into for feedback before saying what we REALLY think at the next posting, email or meeting.

Anyone want to “chip in” and help ME purchase a working copy?  (Hahahhahahaha.  I think I just hurt myself!)

In the end I guess it comes down to one thing.  “Can we really expect a software program to be able to recognize the subtleties and intricacies of adult communication?”

The answer to that one is of course anyone’s guess.

Isn’t it funny how the “language” is always changing, slowly and often un-noticed, the things that we considered “standard” are no longer around. Replaced while we were not looking. Lately I have been hung up on this language thing so I thought I might devote a little time to it this morning.

Often I will keep a notepad next to the chair in the living room, when I hear them I write them down. Things like “New and Improved” and all this other clutter we are forced to deal with on a daily basis. Here are a few for your morning coffee:

Then we get into the Politically Correct Arena.

B.C. it means “before Christ” in most circles denoting dates before what’s commonly accepted as the year Christ was born. In academic circles, B.C. has been replaced with the more politically correct B.C.E., or “Before Common Era.”

A.D. it stands for Anno Domini, Latin for “in the year of our Lord.” It is used to denote time after the birth of Christ. The more politically correct term now used is C.E., for “Common Era.”

C-SPAN it stands for Cable Satellite Public Affairs Network. C-SPAN broadcasts mostly House of Representatives and Senate sessions. It is a television network for morons, given by morons, to morons.

(1) Fine: This is the word women use to end an argument when they are right and you need to shut up.

(2) Five Minutes: If she is getting dressed, this means at least a half an hour. Five minutes is only five minutes if you have just been given five more minutes to watch the game before helping around the house.

(3) Nothing: This is the calm before the storm. This means something, and you should be on your toes. Arguments that begin with nothing usually end in fine.

(5) Loud Sigh: This is not actually a word, but is rather, a nonverbal statement often misunderstood by men. A loud sigh means she thinks you are an idiot and wonders why she is wasting her time standing here and arguing with you about nothing.   (Refer back to # 3 for the meaning of nothing.)

(6) That’s Okay: This is one of the most dangerous statements a women can make to a man. That’s okay means she wan ts to think long and hard before deciding how and when you will pay for your mistake.

(7) Thanks: A woman is thanking you, do not question, or Faint. Just say you’re welcome. (I want to add in a clause here – This is true, unless she says ‘Thanks a lot’ – that is PURE sarcasm and she is not thanking you at all.  DO NOT say ‘you’re welcome’ … that will bring on a ‘whatever’).

(9) Don’t worry about it, I got it: Another dangerous statement, meaning this is something that a woman has told a man to do several times, but is now doing it herself. This will later result in a man asking ‘What’s wrong?’ For the woman’s response refer to # 3.

They evidently learn early in Oklahoma.

Tomorrow, five entertainers who had airports named after them. Six stars who took karate lessons from Chuck Norris. Why George Bush never wears a name tag at High School Reunions.